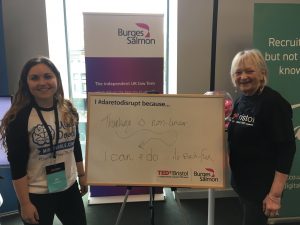 TEDxBristol is the biggest TEDx event in Europe and is all about spreading new ideas, making an impact and building free knowledge to share to a wide community.  This year TEDxBristol took place in November, with the powerful theme of Dare to Disrupt! focusing on “Bristol’s positive disruptors, whose ideas and actions are ripping up the rule book and having a global impact.”

The picture here was taken in the Community Partners hub by Alyssa Haggarty, Trainee Solicitor at Burges Salmon, who were headline sponsors at the 2 day event. Burges Salmon VIP guests throughout the 2 days were asking everyone they came across why they dared to disrupt. Tess Coughlan-Allen from MindDoodle & Flexidb and one of the amazing TEDxBristol 2017’s Community Partners said ‘thinking is non-linear’.  SCT’s very own Halina Jaroszewska who was part of TEDxBristol 2017’s organising team with responsibility for Community Partnerships said she dares to disrupt because ‘I can and do … it’s such fun’.

TEdxBristol 2017 was a great success, a sell out and trending on Twitter. The much appreciated sponsorship from the Community Partners enabled community groups, young people and the much older people to attend who might not have been able to do so. A result in line with TEDxBristol’s core values.

Post event, TEDxBristol held a Wrap Up Dinner for its partners and Disruptors.  Read more about that event in Richard Hill’s article.